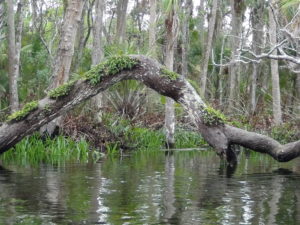 This trip begins with a brief, fifteen minute float down the Silver river to it’s confluence with the Ocklawaha. Here, as the Silver’s cold, clear water blends with the warm, tannin stained waters of the Ocklawaha, the significance of the huge spring run to the Ocklawaha system is apparent. The change is so abrupt that you can hang your hands off each side of your boat and feel water that’s too warm for a comfortable swim on one side and too cold on the other. 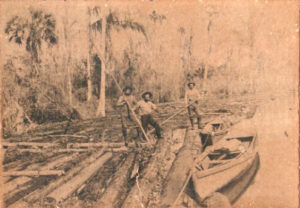 Making our way down stream, the channel winds through a beautiful swamp of cypress, ash, tupelo, palm and maple, occasionally carrying us close to the high bluff which defines the swamp’s eastern edge. This abrupt rise was formed millions of years ago by an uplift fault. In fact, this whole section of the Ocklawaha follows an ancient fault line. The river itself, while not nearly as old as the faults, is exceptionally old by Florida standards. Scientists have found that the muck and peat which underlie the swamp is nearly 17,000 years old.

History buffs and those interested in Florida’s early inhabitants will be interested in the old village sites and tales of pioneer Florida. With its setting among cypress swamps, hardwood forests, and marshes, this is probably the best trip for visitors from foreign lands and northern climes who want to experience the real essence of subtropical Florida.

The mile-wide bottomland forest through which this section of the river flows is a great wildlife habitat. Bear, deer, bobcats and otter are part of the area’s diverse fauna. This was also one of the last refuges of the Florida panther before it’s meager, endangered population was pushed into the remote wilderness of south Florida. During the winter months, migrant birds add a whole new chorus to the ‘music’ of the swamp.

One critter who doesn’t inhabit these swamps are humans. Too low and prone to flood for permanent settlement, the only people found here are those, like us, who are just passing through. The only time we see signs of civilization is when the river flows close to the high bluffs on the swamp’s east side. 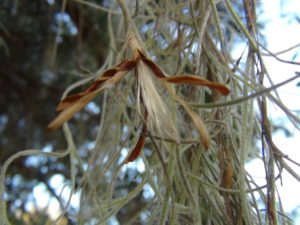 This unusual gray, hanging moss is actually a wispy, thin relative of the pineapple. While found throughout Florida, it prefers damp, shaded forests. It’s primary means of reproduction is vegetative – with sections of it’s feathery growth breaking off in the wind and drifting to another tree branch to drape across. It usually doesn’t have roots, except for small plants which start from seed. In the spring, the faint aroma from the small, inconspicuous pale-green flowers are a welcome gift of spring. Contrary to popular belief, they are not parasitic plants. The small, hair-like scales (trichomes) which coat the plant absorb moisture and water from the air. It was once believed the scales repelled water. For this reason, Linnaeus named the genus Tillandsia, a good-natured jab at one of his students, nicknamed Tillands, who was prone to sea-sickness and always traveled by land when they went on collecting trips. This plant was used by native women who made capes and skirts from them. White Floridians used it for cushioning in car seats and upholstery. As recently as the mid-nineteen hundreds, Florida had a number of ‘hair factories’ where moss was commercially processed.

The earliest historic account of swimming in these waters is not of a person, but of a dog. When the explorer Hernando De Soto came here in 1539, this region was the domain of Acuera Indians. While searching the area for Indian food stores to plunder, the Spaniards came to the Ocklawaha. On the opposite bank they saw Acuera warriors, who made it clear that the soldiers weren’t welcome. Unable to cross the river under a persistent hail of arrows, De Soto decided to sic his dog on the Indians. By the time he reached the far bank, the dog was reportedly riddled with nearly 50 arrows. He crawled out of the river and died at the Indians feet. De Soto got the message and left. 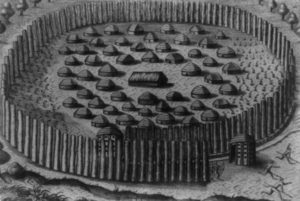 A century later, the Acuera were still firmly entrenched and actively shunned the outside world. One chief’s domain, hidden deep in the forest, was reminiscent of the book “Heart of Darkness” or the movie “Apocalypse Now.” To avoid detection by the outside world, he put a bounty on the head of any Spaniard who came into his domain. This tactic worked so well that no one even knew this tribe existed until one of their warriors was captured in the woods near the La Chua ranch.

On all sections of the Ocklawaha, old beaches and worn-down tracks mark the locations of steam-boat landings from the 1800’s. On this trip, we pass the site of Grahamville, the largest “ghost town” on the river. Old photos show a large mill and landing operation serving a community which sat atop the nearby bluff. As the steamboat era faded, so too did Grahamville. Today, there are a number of residences in the area, but nothing remains of the once-thriving town.