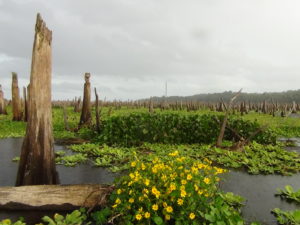 * Adventure Outpost dedicates this trip to the Florida Defenders of the Environment and to
the memory Marjorie Harris Carr. Were it not for their passion and devotion to
preserving the Ocklawaha, the entire river would look like the section we paddle on this trip.

Group size: 1 – 24 people.
Trip length : 4 – 4.5 hrs.
Skill level: Great for beginners and experts alike.
Difficulty: This is an easy paddle on slow, tannin-stained waters. There is plenty of water
here so you won’t have to pull over any shoals or shallows.

Every few years, the water level of Rodman Reservoir is lowered by about 6 – 7 feet to expose and kill exotic hydrilla plants which impede navigation and choke out wildlife. Also exposed, is the old river channel, giving a rare opportunity to see (and paddle!) the lost segment of the river. It is only during these draw-downs that we offer this tour. 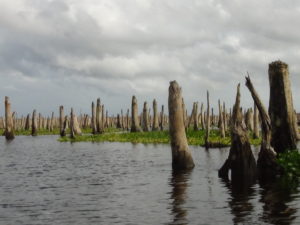 When the reservoir was built in the 1960’s, as part of the ill-conceived Cross-Florida Barge Canal, a straight channel was dug across the reservoir to accommodate heavy barges. In areas of the reservoir that the canal didn’t cross, the forest trees were left standing in the water and allowed to die on their own. As these standing trees decayed, those parts of their trunks above the water line toppled into the water while their lower, submerged parts of their trunks were somewhat preserved. The result is a topped-off forest (usually submerged) of seven foot tall tree trunks. When the water is drawn down, this stump forest is revealed – a silent, stone-grey monument to a once beautiful swamp forest.

Paddling the old channel, one has the sense of being in a Florida version of Pompeii – a once-thriving forest, frozen in time. Only here, rather than lava, it was the dark, tannic flow of the dammed up river itself that entombed the forest. The degree to which this forest of stumps has been preserved for nearly half a century is surprising. The buttressed trunk of a cypress stands with all the grace of the giant it would have become. At it’s side, a small holly trunk angles out over the river, reaching up toward the filtered sunlight that leaked through the cypress’ canopy. Dogwoods, ash, gum, hickory and others; all identifiable by their unique features; all standing ready for a season which never arrived.

Even in death, this silent forest attracts a rich variety of animal life. Alligators rest on the newly exposed river bank, enjoying the sunshine provided by a topless forest. Egrets and herons feed in the shallows while ibis tiptoe through the thick, new growth of pennywort, smartweed (Polygonum spp.) and beautiful parrot feather plants (Myriophyllum aquaticum) that, even though they’re exotic species, add a welcome element of green. 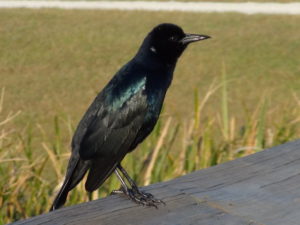 Redwing-blackbirds and grackles seem to have too many choices – perform courtship rituals, feed among the trunks, or chatter at passing boaters. On a recent visit to the dried reservoir, I saw a couple of yellow-crowned night herons and an American bittern. But, most notable are the ospreys. The concentration of them on this reservoir is impressive – probably at least a dozen nesting pairs (and I’m guessing conservatively). Bald eagles are also around too, so keep a sharp eye to the sky.

We’ll also get a bit of history on this trip, starting with our launch from the site of the old Orange Creek ferry. A short way downstream, we’ll pass the site of Ft. Brook, a Seminole War fort that, later, played a key role in the Civil War. During the later years of the war, contraband, including guns, ammunition and other supplies were shipped by a chain of blockade runners and steamboats to Ft. Brook. From here, they were taken by wagon to the rail line at Waldo where they were then shipped north to the troops. Hubbard Hart, whose steamboats were used for this intrigue, made this his base of operations and moved his family here.

Continuing downstream, occasional high banks mark the sites of other steamboat landings, including Cedar Landing. A community of the same name still lies nestled in the nearby forest. 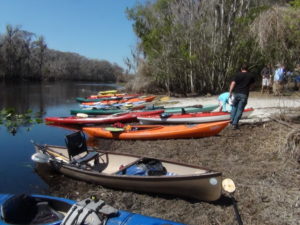 Our lunch stop is at another landing, alternately known as Blue Spring or Salt Spring. Here, we can see the spring basin of the largest of a half dozen springs that are covered when the reservoir is full of water. The dark sediment on the bottom and the mix of tannic water flowing over it, gives the spring a dark color, but the flow is still noticeable. Old timers tell us this was a favorite swimming hole for the locals and had a bath house at the time of inundation.

From here, we’ll follow the old spring run, known as Indian Creek, back out to the main channel and around to our takeout.