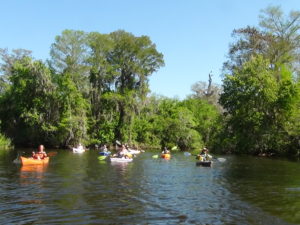 Group size: 1 – 24 people
Trip length: 3.5 – 4 hours
Skill level: Intermediate – advanced
Cost: This one is $50 per person ($39 for “wanna go” members). With your own boat it’s $40 per person ($29 for members).
The launch site is about 1.5 hour drive south from Gainesville.
Description
This is a nine mile stretch on relatively quiet waters. We’re usually on the water about 3.5 – 4 hours (including lunch stop in a long abandoned orange grove that still yields lots of  fruit). 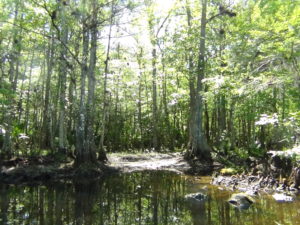 The Withlacoochee River has been designated one of the State’s “Outstanding Waterways” and this section is about as outstanding as it gets. The only houses we see for the entire trip are those at the small fish camp at our launch site. I call this the “Trails End” section of the Withlacoochee River, in honor of the Trails End Camp where we launch. Our trip ends about nine miles downstream at Marsh Bend Park on Outlet River (a mile long stream connecting Lake Panasofkee to Withlacoochee River).
For much of it’s hundred mile length, the Withlacoochee carries itself with a subtle beauty that is unlike any other Florida river. The section we’ll be exploring on this trip is one of the finest. Sandwiched between two large wetlands, Wahoo Swamp to the south and the Tsala Apopka wetlands to the north, time and civilization have never stood a chance here.
In addition to being relatively devoid of human enterprise or habitation, this part of the Withlacoochee has a great diversity in appearance, ranging from relatively narrow channels to broad expanses nearly a half mile wide. The low swamp forests lining the bank are dominated by cypress with a nice mix of gum, ash and red maple.
The river itself alternates between open expanses of water to large areas of marsh. Some of these marshes are in the form of floating mats of water hyacinth, pickerelweed, bur marigold and climbing hemp vine, while in other places, they are more firmly rooted, creating semi-permanent islands. This abundance of aquatic vegetation means different things to different people. To the motor boats, they’re a nuisance, to the first-time explorer, they’re the source of heightened confusion in trying to find the way, and to the nature lover, they’re a virtual banquet of wildlife watching opportunities. 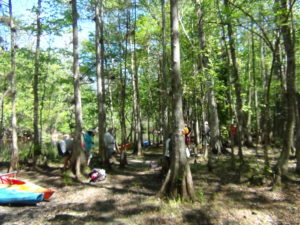 Cypress, ash, gum and red maple trees dominate the wetland forests that line the shores. There are always plenty of water birds which, along with turtles, gators and other reptiles, always keep things interesting. Like other sections of the Withlacoochee, we also have a good chance of spotting my personal favorites – the otters.
Highlights
This is a very scenic trip–photographers will find plenty of subjects to keep their shutters shuttering. The lack of human encroachment and abundant wildlife make this one of the finest sections of the Withlacoochee on which to get a full, heady dose of nature.
History
As with most inhospitable corners of wild Florida, the only people who have called Tsala Apopka Lake and Wahoo Swamp home are those who didn’t want to be found. In the early 1800’s, there was probably nobody who more desperately wanted to remain unfound than the Seminole Indians. As friction between them and the swelling population of white settlers increased, the Seminoles established villages deep in these swamps. 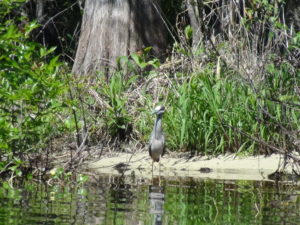 From here, in December of 1835, they staged two simultaneous raids against the Americans. One, against Ft. King (today’s Ocala) that resulted in the death of the Indian Agent and an aide and the other, an ambush 110 soldiers travelling the nearby wagon road. This second attack, in which all but four of the American soldiers were killed, has gone down in history as the “Dade Massacre”.
After the days slaughter, the Seminoles retreated to these swamps and celebrated their triumph. The villages remained undiscovered for a while, even though the Army was sure these swamps were the Indians’ main stronghold. Eventually, a series of battles, including the Battle of Wahoo Swamp, drove the Seminoles south to an even larger wetland, the everglades.
Difficulty
This is a 3.5 – 4 hour paddle on relatively slow water. It’s very open in places, so wind can be an issue. Strength and endurance are your most important considerations. Like the lower Ocklawaha, there are many tempting side channels and the floating vegetation can be confusing, so you won’t want to get out of sight of the guide.