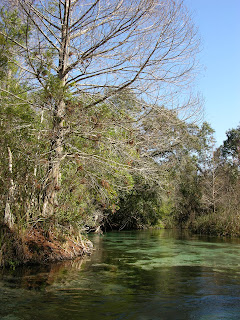 Weeki Wachee Kayak and Canoe Tour
Group size: 1 – 24 people
Trip time: 3.5 – 4 hours
Skill level: Intermediate – Expert
This river is about 2 hours south of Gainesville, 1 hour north of St. Pete and 1.5 hours west of Orlando.
Description
This is one of the most beautiful spring runs in Florida, easily ranking with Ichetucknee and Silver. It’s also one of the most diverse. Between the head spring and its entry into the Gulf of Mexico, this gentle stream passes through high banked scrub, Hydric forest, low swamp and a few small freshwater marshes. Most of our Weeki Wachee tours end a couple of miles before the salt marshes and open Gulf. Even so, most of the water we paddle is influenced by the tides. While it never reverses flow like Waccasassa, it’s flow rate fluctuates dramatically. 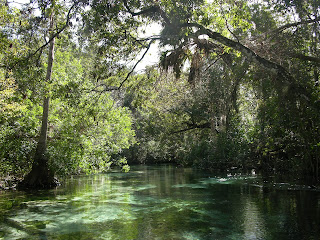 One advantage to starting at the headspring, is that it allows us to see the open, freshwater marsh community that dominates the first mile of the river. This is where we see the most wildlife, such as egrets, herons and cormorants.  A very unique element of this first stretch is the presence of pelicans. They, along with their woodstork buddies, have a strong affinity for this area. Behind the marsh vegetation, on both sides, the river bank rises sharply, reaching 25 to 30 feet in some places. These sandy white bluffs are relict dunes and, as with the ancient dunes we encounter on other trips, these are topped by open, dry scrub habitat. Those familiar with this increasingly rare habitat will recognize the lanky, widely spaced sand pines that are characteristic. It’s not surprising that in one old account, Weeki Wachee spring was referred to as White Mountain Spring. 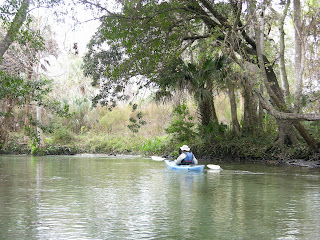 After the first mile, the river slowly narrows, as it enters Weeki Wachee swamp (actually the southern end of the vast Chassahowitzka swamp that stretches twenty miles to the north). Here, the relatively narrow channel winds through a mature, often closed canopy of cypress, bay and gum in an excellent subtropical mix with sabal palms and hollies.
Houses flank some stretches of the lower 1/3 of the run, but they’re not too over bearing. In fact the plethora of murals and yard art–most of it heavy on manatee and mermaid themes–evoke a few grins to soften the blow of re-entering civilization.
Real manatees (not just the yard art) are also regular visitors to the Weeki Wachee in the winter. In the warmer months they are scarce.
Interlude
For anyone who grew up in pre-Disney Florida, the name Weeki Wachee conjures memories of buxom, flowing-haired mermaids, waving regally as they drift past the glass of an underwater observatory. No pre-pubescent boy’s childhood was complete without a trip to the Weeki Wachee mermaid show.
To young Floridians, the mermaid myth was the equivalent of the Santa Claus myth to kids elsewhere. And, as with the legend of Santa Claus, the mermaid myth usually died an ugly death (I’m still haunted by memories of the death-cloud beer burp which the ‘Jolly One’ wafted into my face as I sat on his lap referencing pages from the Sears catalog’s toy section – but that’s another story). For me, the grand disappointment happened when I was six. I had always been able to overlook the mermaids’ frequent visits to the bubbling air hose. And, while they were a bit troubling, I was even able to ignore those weird little bubbles which fizzled between the teeth of their otherwise perfect smiles. But, after the show on that fateful day, when I spotted my beloved ‘goddess of the deep’ sneaking out the “Gulls Room” door, walking, unmermaid-like, on two feet and trailing a streamer of Charmin’s extra-absorbent from her penny loafers, the dream was shattered.
As an adult, I’ve had to accept the reality that there are no mermaids. Instead, such simple pleasures as beautiful rivers have to suffice. If someone had told little Lars that, as an adult he would be coming back to this river, not to stare puppy-eyed at the sirens behind the glass, but to explore the river overhead, he’d have probably choked on his Jujubee’s.
*
Highli 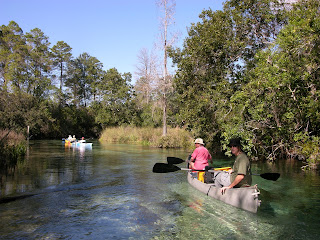 ghts
In addition to this beautiful setting for wild manatees, bird lovers will also enjoy this trip with pelicans, wood storks, wood ducks, and many other water birds especially near the head spring. Otters are also common. On a couple of our trips last winter we saw Little
Difficulty
The channel gets narrow and winding in places. This can be challenging for inexperienced paddlers. Because of this, we don’t recommend this trip for beginners. It is a better fit for intermediate and advanced paddlers.