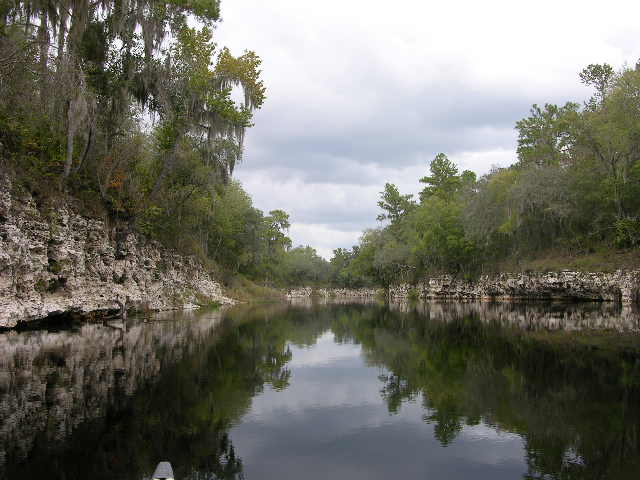 Description
On this trip we’ll be paddling the upper Suwannee River from the confluence of Alapaha River to Suwannee River S.P. We begin this trip with a short, ten minute stroll through some very interesting historical sites, representing a few of the more important periods of the Suwannee’s history. Then we hop in the van for a 10 minute shuttle up to the launch site to start our 7.5 mile paddle down the Suwannee.
The plant communities along this part of the Suwannee reflect the higher, drier terrain through which much of the river winds. The combination of high, sandy banks and dark, tannin-stained water, makes aquatic vegetation relatively scarce. But on shore there’s no shortage of greenery. Lanky, coastal plain willows, river birch, and Ogechee tupelos along with a number of sedge and grass species cling to the higher, firmer sand banks.
On top of the bluffs, an unbroken forest of oaks and pines rule the high ground. It’s a fairly remote area and animals such as deer, bobcats, hogs, turkey and an occasional bear come to the waters edge for a drink although sightings are relatively scarce.
Also residing in this stretch of the river are a fair number of beavers. You don’t have to look very hard to see their sign, which includes some impressive, long slides which they use to skid limbs, branches and other woody munchables down to the river. 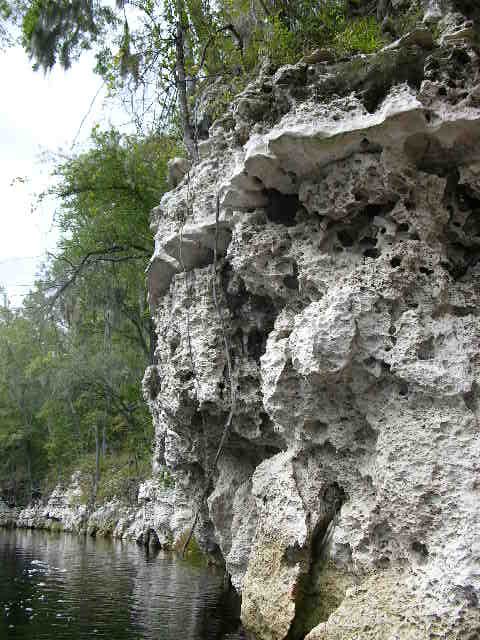 This part of the river is lined with many inviting sugar-sand beaches, although with the higher water levels we are currently experiencing, it will only be the upper portions of the dunes showing. Even so, they make ideal luch and swim spots which we’ll be sure to use to best advantage.
History
There’s a theory which proposes that the name, “Suwannee” comes from the Creek Indian word “Suwani,” meaning echo. When I first learned this, I was still a young wanderling and my explorations had not yet brought me to the echoic canyons of the upper Suwannee. I didn’t buy the story. Today, I’m more familiar with this river, and I have to admit that any homesick Alpen-folk who want to yodel, will find the acoustics of some of Suwannee’s deeper gorges (not seen on this trip) well-suited to their art. But, I’m still not convinced that this is the names origin. . . . origin. . . origin . . .
A more likely source of the name was the Spanish mission, San Juan de Guacara, which was located alongside the Suwannee, west of today’s Live Oak. For nearly a century, beginning in the early 1600’s, a network of Christian missions dominated life in north Florida. Today, the names of many natural features in north Florida trace their roots to that important era. San Felasco Hammock, San Pedro Bay and a number of rivers such as the St. Johns, Santa Fe, and St Marys took their names from Spanish missions which sat along their banks. San Juan de Guacara was located near Charles Spring, where the missionary’s main artery of transportation, the Mission Trail, crossed the Suwannee.
In the years following the demise of the mission system, in the early 1700’s, the river was called San Juanee, or “little San Juan” to distinguish it from the other San Juan (St. Johns) river to the east. From there, it’s not hard to imagine the name evolving to ‘Suwannee.’
The confluence of the Withlacoochee River and the Suwannee, a beautiful area now protected by Suwannee River S.P., (and the place where our trip will end) was once the site of the thriving riverboat community of Columbus. At normal water levels during the late 1800’s, this was considered the head of navigation for the river’s steamboats. Today, all that remains of the town is it’s cemetery, which you can visit by hiking out one of Suwannee River S.P.’s. excellent trails (some of my favorite trails in the State). Also in this park are some earthworks built by confederate soldiers to protect the bridge across the river during the Civil War. We’ll have a look at these on our pre-paddle “history walk” in the park.
Difficulty
This is an easy paddle, going downstream all the way. But, even though we’ll have the current with us, it’s fairly slow, so you’ll have to paddle a bit. Those of you who have been on trips with me before know that we tend to go slow, taking in the sights and sounds around us, (although you’re welcome to go at your own pace) – speed’s not an issue.