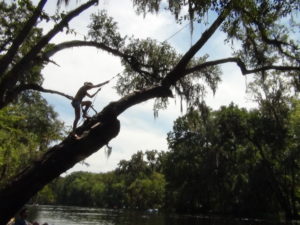 Group size: 1 – 24 paddlers
Trip time: 2 – 5 hours (depending which trip we do)
Skill level: Great for beginners and experts alike.

* NOTE – this page is for guided tours only. For information and pricing about unguided paddling on Santa Fe River, please go to the “Santa Fe River Unguided/Shuttle River Trips”  page.

There are two distinct sections of Santa Fe River. The upper river is a small creek, a brown, watery trail ambling aimlessly through the shaded hardwood forests and intermittent swamps of northern Alachua County. It starts at Santa Fe swamp, just north of Lake Santa Fe near Melrose and extends about 30 miles west to present day O’leno State Park near High Springs. In some places, this little stream can be easily crossed with a running leap. And yet, it played an important role in the early history and settlement of this area.

A quarter mile downstream from O’Leno State Park’s recreation area (and still within the park), a huge cavity in the porous limestone swallows the river in its entirety. For three miles, the river courses underground, following a network of subterranean channels before resurfacing. It reemerges a changed river. 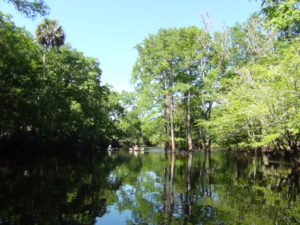 Like a butterfly emerging from its chrysalis, the pupal creek that was the upper Santa Fe now emerges as a larger, faster waterway. It is now truly a river. The primary reason for this transformation is an increased volume of water. While underground, the river water is joined by an upwelling of the Floridan aquifer. So, as it surfaces into the world of light and color, this the reborn river carries the combined waters of the upper Santa Fe and a large, artesian spring. It is here, at the fountainhead known as River Rise, that the second Santa Fe is born.
Having now entered an area of more exposed limestone, the river carries itself with bold determination. It’s steady, unfaltering surge carves through the rocky terrain in broad, sweeping strokes as it weaves a 30 mile path westward. Along the way, it picks up the clear, cool waters from dozens of springs before merging with the Suwannee River near Branford.

Many deer live in the forests of O’leno State Park and River Rise State Preserve through which this stretch of the Santa Fe runs. A couple of families of otters live in dens on the north bank, and are often seen by morning paddlers. A relative shortage of bird species is compensated for by some very active and temperamental kingfishers. The high, sandy banks here are ideal for their particular style of nest. There is a major nursery for river frogs (Rana [Lithobates] heckscheri) near the Rise. Every spring, the waters along certain sections seem to boil with fat river frog tadpoles.

The Santa Fe river’s ‘natural bridge’ has been an important route of travel for thousands of years. The trail was already ancient when Hernando De Soto came to the area in 1539. The river was flooded however, and was flowing over the land bridge. He was forced to take an alternate route across the river a few miles upstream from O’leno Park. 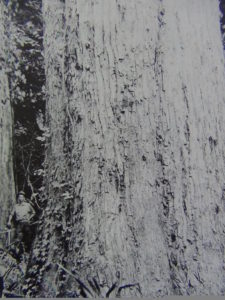 When the Spanish established a chain of missions across north Florida in the early 1600’s, they located them at Timucua Indian villages along this trail. The closest mission to the land bridge was Santa Fe de Toloca. This was one of the more important missions and was the namesake of the river. Several miles to the south was another important mission – San Francisco de Potano. This missions name also survived the test of time, but didn’t come through as intact as Santa Fe. Over the centuries the name San Francisco evolved to San Felasco, which is still used for the beautiful hardwood hammock on the northwest edge of Gainesville where the mission was located.

After the missions and associated Indian villages were wiped out by English invaders in 1704, the trail was little used. By the middle of the century, migrating Creek Indians moved in to fill the void left by the vanquished Timucua tribe. These migrants were soon being referred to as Seminoles and established villages throughout the area. Their main village was at Paynes Prairie, twenty miles to the south.

One of the more famous people to travel the road during this time was Daniel Boone, who came looking for land to homestead. He was unimpressed with the swampy nature of most of Florida. Nevertheless he bought property in Pensacola and reluctantly sent for his wife. She didn’t want to leave the Appalachians and, deep down, neither did he. Before long he had sold the parcel and was heading back to the hills. 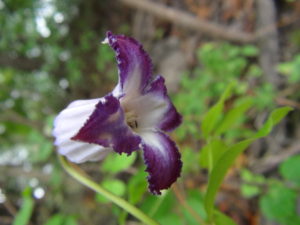 The trails next incarnation was as the Bellamy Road, Florida’s first Federal road, established a few years after Florida became a territory of the United States in the 1820’s. Requirements for the road builders were simple – clear away the ancient trail, cutting all stumps to less than a foot in height.

Alongside the trail, a settlement named Keno was established in the mid 1800’s. After catching some flack for having named the town after a kind of gambling game, the town leaders changed the name to Leno. The town was short-lived however, and with the passing of time the site was referred to as Old Leno and later, O’Leno. Today, some of the earthworks associated with the mill can still be seen in O’Leno State Park.