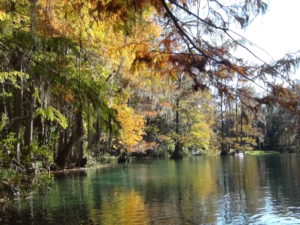 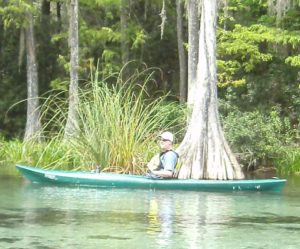 The primary source of this beautiful 5.7 mile river (formerly known as Blue Run) is Rainbow Spring (formerly Blue Spring). As it makes it’s way southward toward it’s confluence with the Withlacoochee River, the river picks up additional water from a number of smaller springs – most notably Garfish Hole about a mile below the head spring.

This 24 ft. deep spring has, in recent years, picked up the nickname, K.P. Hole (for the Knights of Pythias who used to have annual gatherings here). Nearby, a beautiful, dense, bottomland forest extending toward the north east follows the small trickle of a run from Indian spring.

Situated in the sandy, rolling highlands of the Brooksville Ridge, Rainbow spring run has a very different personality from it’s sister spring, the swamp shrouded Silver 25 miles to the east. High, dry banks along most of the river bank, 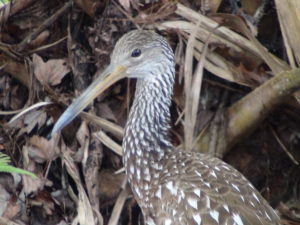 have allowed property owners to build homes close to the water. But, with it’s exceptionally clear, blue waters and lots of birds and other wildlife, the Rainbow is still a beautiful paddle.

As with all springs, the flow rate of Rainbow spring varies considerably. Between 1965 and 1974, the flow rate ranged from a high of 1,230 ft³/sec. to a low of 487 ft³/sec. The average was 763. Today, the average is somewhere around 500 ft.³/sec. These measurements are taken at the Hwy 484 bridge so as to include all of the lesser springs feeding the run. The temperature averages about 74ºF year-round.

For well over a century, as adventurers and nature lovers have beat a path to the shores of Silver Spring, her sister spring, the Rainbow has gone relatively unnoticed. A surprising fact when you consider that it’s Florida’s second largest spring, gushing an average of over 500 cubic feet per second. Maybe it’s the name. The Indians called it Wekiwa, which means, simply, “the spring of water,” a relatively uninspired name which, in the lexicon of Florida’s natives was as common as the name Blue Springs is today. When white settlers displaced the Indians, they changed the springs name to, you guessed it, Blue Spring. 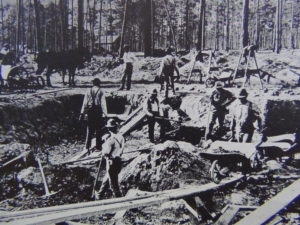 But, Blue Spring wasn’t completely overlooked. In 1890, when the area became ground zero for Florida’s huge phosphate boom, a health resort with a large hotel was built on the high slope above the spring basin. Among other things, the resort offered boat rentals and passenger steamboat service to Dunnellon, a few miles downstream.

It wasn’t until 1937 that the springs promoters, realizing that this beautiful spring needed an identity of it’s own, renamed it Rainbow. But, the change didn’t come easy. Even today, you’ll still find many locals who call the river Blue Run.

In 1950, the hotel burned down. Ten years later, the spring caught the attention of S & H Green stamps and Holiday Inn, who bought 55 acres around the head spring. The hotel was rebuilt and the property was developed it into a full scale tourist attraction, complete with river boat rides and log rafts. They even offered river tours in a small, air conditioned submarine!

The park closed in 1974, and after sitting idle for 15 years, was bought by the state. Rainbow Springs State Park opened in 1995. 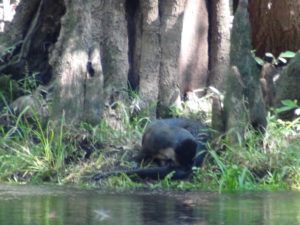 The water of this spring run seems more clear and blue than most – probably because of the wide open canopy which allows plenty of sunshine, and the white sand bottom – so you’ll see lots of fish and plenty of healthy eel grass meadows. Water birds of all persuasion love Rainbow River. In spring and early summer months, cormorants and anhingas come together in a couple of small but active rookeries in the lower river. Wood ducks, common gallinules and pied-billed grebes also find this river the perfect place to raise families. We often see mothers with small trains of youngsters threading in and out from the marsh vegetation. Another highlight of this river are the river otters. Several extended families live along the run, making this one of the best places to see these fascinating and endearing aquatic mammals in North Florida.

The first hour of this trip is a 1.5 hour, round trip paddle up to the spring head and back. The upstream portion (about 45 minutes) is against a moderate current – not quite as strong as Silver, but close. Aside from that, this river’s a breeze. It’s wide and the curves are long and easy.