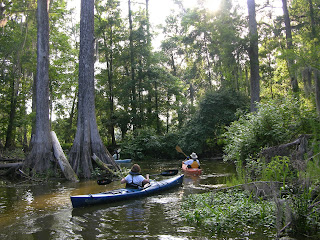 Description
Located about 20 minutes east of Gainesville, Prairie Creek connects two of North Central Florida’s most popular havens for wildlife watching, Newnans Lake and Paynes Prairie. So, it’s no surprise that a paddle down this winding, dark-water, creek offers a variety of plants and animals. We usually see a number of water birds, and if you watch closely, you’ll probably spot a few turtles sunning on logs and branches debris on the riverbank.
We begin this journey on Newnans Lake. The dense marsh thickets that sprouted during droughts a few years ago are still thriving, as is the abundant wildlife that loves such places. Around the edges of these marshes, American lotus plants are at the tail end of their bloom. While many are still displaying their showy yellow flowers, most are sporting the odd looking seed heads that are commonly seen in flower arrangements. 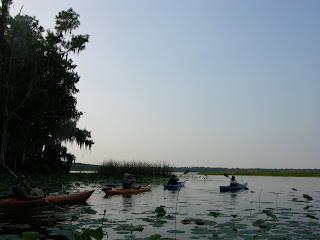 As your boat glides into the mouth of Prairie Creek, you’ll realize you’ve discovered one of Gainesville’s least-known natural treasures.
For most of it’s run, Prairie Creek courses through a mature forest of mixed hardwoods and cypress which form a dense, closed canopy overhead. Most years, seasonal rains cause the creek to brim and spill over the low, sandy banks into the forest. This keeps the understory relatively free of vegetation and allows good viewing into the forest.
As our journey carries us closer to the prairie basin, marsh and deeper swamp habitats become more prevalent, and the wildlife changes accordingly. Water birds, including ibis, wood storks, egrets and herons become more common. The last leg of the trip skirts along the backside of the huge Camp’s dike, erected in the ’30’s to divert the creek’s flow away from the prairie.    Gliding down the first section of Camp’s Canal, we’ll pass the controversial weir that, as dictated by State regulations, allows a percentage of the water to flow onto the Prairie and shunts the rest down the canal to River Styx and Orange Lake.
Wildlife
As mentioned above, we might spot some wading birds, osprey and possibly a bald eagle on Newnans Lake. The creek forest is home to woodpeckers (we commonly see a pileated or two), owls and various perching birds. As of a couple of years ago, there was apparently a panther (probably an escaped pet??) that roams these woods. Known as the “Micanopy Cat,” it was seen by a number of people including a park ranger at Paynes Prairie State Park. You might also see some bear sign. There’s been at least one bear in the area whose tracks 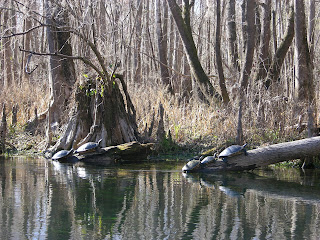 I’ve seen several times in recent years. History This trip takes us into one of the wilder areas of the Paynes Prairie domain which boasts a fascinating cultural and written heritage dating back nearly 12,000 years (somebody should write a book!).  Prairie Creek, while being an interesting and fun little creek, bears the scars of heavy abuse. Here, you’ll find a good example of how important even the smallest changes to a system can have a huge impact. In the 1930’s, the natural flow of Prairie Creek onto Paynes Prairie was blocked by a dam and redirected to River Styx and on to Orange Lake.  Later, the head of the stream, where the water entered from Newnans Lake, was dammed to keep water levels high in the lake. It wasn’t until the ’70’s and ’80’s that it became clear how harmful these alterations were to all of the systems involved, especially the Prairie. The dam at the Newnan’s Lake end was removed, but the sediment that accumulated while it was in place remains and has created a

block to sediment flow out of the lake. Removing the dike and canal at Paynes Prairie has proved to be more of a challenge. With two highways and a number of private properties around the basin, letting the water levels rise and fall, uncontrolled, would require a lot of changes and preparations.  For our purposes, the most relevant event in this creeks history is the recent flooding brought on by the hurricane season. This comes on the heels of a three year drought which is just ending. At it’s most extreme, in 2002, Prairie Creek was more a hiking trail than a stream. But, the waters have returned and so will we.
Difficulty
Even though there’s plenty of water and it’s a relatively short trip (about 2.5 – 3 hours), there will be a bit of weaving between obstacles in some places. The main consideration is your physical ability.