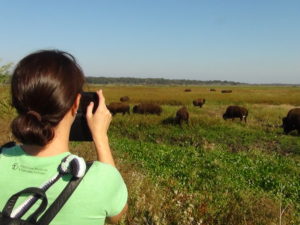 Paynes Prairie is a large, 20 square mile basin formed by dissolution and collapse of underground limestone. This is the same process that forms the many sinkholes in this part of Florida. It’s also the process that forms most of our local lakes, but what makes the Prairie different is that there’s a hole in the bottom. At the northern edge of the Prairie basin, a hole in the limestone bottom known as Alachua Sink, drains water into the underground aquifer system. It’s a relatively small hole however, perhaps the size of a small car, so it takes a long time to drain the basin when it floods. This constant dampness – rarely dry and only occasionally flooded – has created a fantastic marshland. 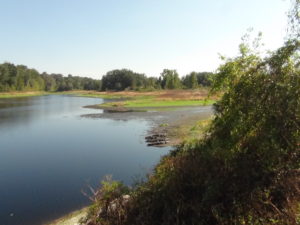 This hike starts with a brief, 10 minute discussion of the Prairie’s early history (12,000 years of history in 15 minutes – I’ll talk fast!). We then set of into the Prairie. When we reach the observation deck in the center of the Prairie, we’ll see what animals we can spot. There, surrounded by the sights, sounds and scents of the Prairie, I’ll spend another 10 – 15 minutes giving some of the more recent history.

As we leave the gravel parking lot and stroll the narrow path that leads down to the Prairie, I’m usually filled with a sense of anticipation. What animals will we spot? What plants will be blooming or setting seeds? What surprises does the Prairie hold for us today?

As the trail passes below a massive live oak, we gaze up in awe. 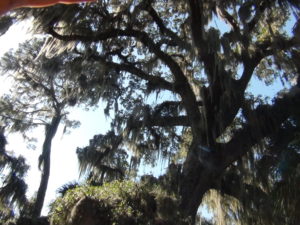 One of the Prairie’s ancient live oak sentries

It’s appearance alone–massive trunk, expansive, open canopy and broad, arching limbs adorned with green, species-rich thickets of resurrection fern and other small plants–often makes the group fall silent. But for me, it’s not the trees size but its setting that fires my imagination. Situated close to Alachua Sink, with a wide view across the open Prairie, I wonder what events this ancient giant has witnessed? How many times did Don Thomas Menendez Marquez, whose La Chua ranch house stood on this bluff in the 1600’s, stand in this same shade and gaze across the Prairie? What did he see? Did pirates rest here after raiding the ranch? How many Indians, explorers, settlers, soldiers, missionaries, ranchers and cowboys has this tree comforted with its cool shade? How many weary travelers tied their horses to it? Bartram? Cowkeeper? Who leaned against it to steady their rifles? binoculars? scopes? How many people have hidden behind it? From whom? How many people waited here for someone to arrive in their canoe? or steamboat? or powerboat? How many people have stood here in awe?

The time I’ve spent gazing up at this giant oak over the years, watching the interactions of wildlife and conjuring scenes from the past, must certainly run into the hours. But, as far as the tree is concerned, I’m just another of the countless human specks that have blown across it’s roots over the centuries. Dreamers and schemers have come and gone, but this grand sentinel remains. 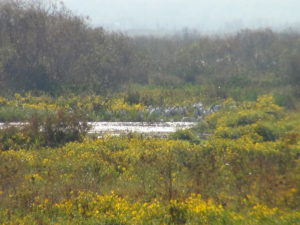 After passing the oak tree, the path descends the bluff and skirts the north and western lip of Alachua Sink. After passing another fine live oak (don’t get me started!) we enter onto the open Prairie basin. From here, the view is as variable as the Prairie itself. Short natural cycles, like time of day and season of the year, dictate what animals you might see and what plants will be blooming. But, all of these depend on a much bigger cycle that makes the Prairie so unique and such a Mecca for wildlife – the flood cycle.

With every phase of the flood cycle, the dominant plant and animal species change. At present, we are coming out of an exceptionally high flood. After two years, water levels on the Prairie have finally receded enough to expose LaChua trail. The last time I was out there, about 2 months ago, the trail was only open as far as the Sink, but I understand it is now open all the way out to the observation deck. According to Park Ranger Julie Tabone, the wildlife is loving the high marsh conditions and birding is great. Sandhill cranes are spending alot of time in the Alachua Lake portion of the basin, near the observation deck.

Located a few miles south of Gainesville, this 20 square mile wetland prairie is not only a wildlife hot-spot, it is one of the most historically significant natural features in north Florida. For the first nomadic hunter-gatherers to enter Florida about 12,000 years ago, it was all about location, location, location – location of big game (including mammoths, mastodons and more), location of water and location of tool making materials, most notably a type of stone known as chert. Chert is the best material in Florida for making spear points and blades.

In later periods, the Prairie continued to be an important location for native settlements. Archaeologists have found abundant artifacts dating from every cultural; period up to the present. 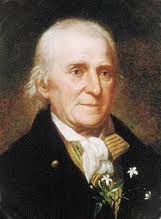 William Bartram was 35 years old when he explored Paynes Prairie–long before he sat for this portrait.

In 1774, naturalist/explorer, William Bartram came through the area and gave the outside world the first detailed account of the fabled “Alachua Savanna,” as Paynes Prairie was then known. Among the many interesting things he saw was a village of some of the first Seminole Indians (originally Creek Indians from Northern Georgia. He also gave a detailed account of the plants and animals. Today, the park managers of Paynes Prairie Preserve State Park use Bartram’s descriptions as their model in their nefforts to maintain the Prairie’s diverse ecosystems as they were in 1774.

Paynes Prairie has a long history of flooding during high water events (if this comes as news to you, there’s a book I’d like to recommend ;-). Since the 1800’s, the ephemeral lake that is created by these floods has been referred to as Alachua Lake. Even in dry periods, the relatively small pool of water that remains in the low center of the basin retains the name – like a devoted keeper of the flame, waiting for the rains to return. This past hurricane season brought the awaited rains and Alachua Lake has been reborn.

Over the centuries, boaters of all sorts have taken advantage of the occasional lake. The nearby dugout canoe graveyard that is Newnan’s Lake gives ample proof that north Florida’s aborigines were paddlers, so it seems likely they took to the waters of Paynes Prairie whenever water levels allowed. 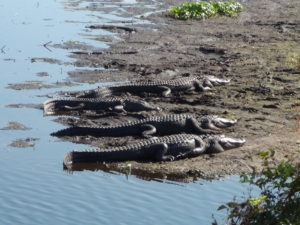 Gators love the Prairie as much as we do!

The first documented boats on the Prairie were small steamboats used to ship goods and supplies (and the occasional brave passenger) during a 20 year flood that lasted from 1871 to 1892. The convenience of water transportation as opposed to shipping produce (and people) by way of the treacherous, sugar-sand wagon roads around the prairie perimeter, was a boon to area planters. Citrus cultivation was enjoying it’s heyday in north Florida and the heart of the industry was centered at Paynes Prairie. Recreational sailing was also popular on Alachua Lake. Contemporary accounts mention days when many sails could be seen skimming through the wind ruffled whitecaps (the lake was deeper than it is now).

In the 1920’s, as fill for highway 441 was being laid across the Prairie, flooding rains filled the basin. As they had done so often before, the locals brought their boats to the reborn shoreline and took to the water. By now, it was gas-powered motor boats that plied the shallow lake. The half completed road bed for the highway became a favorite launch site.

The flooding of the 1920’s proved to be one of the more typical, temporary mood swings of the Prairie and within a couple of years the waters had receded. By the ’30’s, the highway was complete and a new system of dykes and canals was completed by the cattle ranching Camp family who owned the Prairie. The new water control structures made the possibility of ever seeing another prolonged “lake” period, unlikely. Wrong again. In the 1960’s, the Prairie seemed to be on the verge of becoming a permanent lake – this time, with the help of humans. 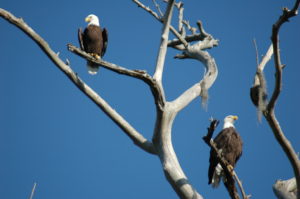 Bald eagles are never far away

When the Prairie was named a “wildlife sanctuary” in 1960’s, there was much debate about what to do with it. One of the most strongly lobbied ideas was to permanently flood the basin. The plan called for raising the Hwy 441 roadbed and constructing a tramway to carry tourists across the water. Boats could once again enjoy the open waters of Alachua Lake. The list of organizations was considerable and even included the local Audubon Society! Luckily, the State bought the Prairie in 1970 and all efforts turned to restoring the Prairie’s to it’s natural state. Today, the park service is committed to restoring the natural habitats and wildlife communities that existed on the Prairie before European encroachment.

At all water levels (including no water at all) Paynes Prairie is a Mecca for wildlife. There’s a healthy alligator population, but with all of the water for them to frolic in, we probably won’t see any more than an average river trip or lake paddle. Birding is always good, with the full roster of common wading birds, assorted warblers, grackles, redwings, osprey, bald eagles, northern harriers and red-tailed hawks all being commonly seen. Sand hill cranes spend a lot of time here. The Prairie also has a reputation for surprising us with some bird species that are uncommon in the Gainesville area, including white pelicans, roseate spoonbills and the large fulvous whistling ducks. On all recent trips, we’ve spotted black-necked stilts, osprey, bald eagles, house swallows, barn swallows, American bitterns, and many wading birds of all persuasions. 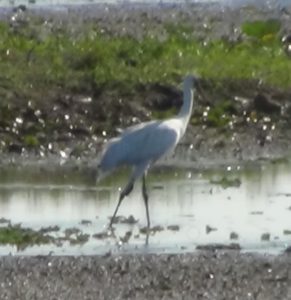