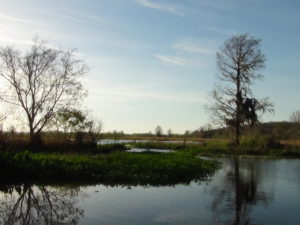 This Lake is a few miles southeast of Micanopy and about 15 miles south of Gainesville. To see this river’s general location, go to the River Locator Map 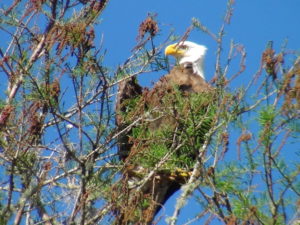 This 3 hour paddle takes place in the southwestern corner of Orange Lake, near the town of McIntosh. This is opposite the area we see on our Cross Creek trips, and while these two areas are separated by only a few miles, they have a different look and feel. This is apparent from the moment you arrive at the launch site, where you find yourself enjoying the vista from atop an oak-shaded, fifteen foot bluff.

The waterscape we paddle though has a different look as well. Rather than skirting the shore, with marsh on one side and open water on the other, we weave though scattered tussocks. And it is theses tussocks – some rooted in the shallow lake bottom and others free-floating. These are the famous “floating islands” of Orange Lake. 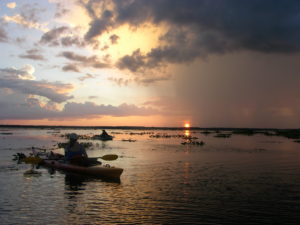 Only a handful of Florida lakes have the conditions needed for development of floating islands – shallowness and a tendency to dry and fill on a regular basis. This first trait is fairly common to Florida lakes. Even her sister lake, Lochloosa, to which she is intimately attached by the umbilical thread of Cross Creek, has a shallow, sandy bottom much like Orange’s. But it is the second key ingredient that is much less common. In Orange Lake, the feature that makes water levels fluctuate dramatically is a sinkhole at the lake’s edge.

During low water, vegetation takes root in exposed muck. When the lake refills, air trapped in the soil around these “tussocks” of vegetation cause them to break free and float on the surface. A floating islands are born. 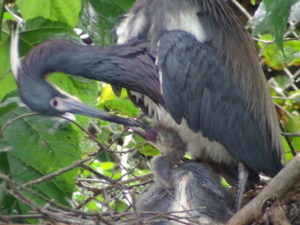 Wading birds are year-round residents of Orange Lake, but are especially common in summer when they use larger tussock islands for nesting rookeries. Osprey, bald eagles, rails, stilts, moorhens and several species of pipers and plovers are common. In winter, it’s a great area for ducks and even occasional loons. On our sunset tours, we watch for interesting amphibians called two-toed amphiumas.

The affinity of prehistoric Floridians for this lake is confirmed by a richness of archaeological sites. One of the most notable is a village/mound complex that contains Archaic Period burial mounds that are the oldest known in north Florida.

Hernando DeSoto was likely the first European to see Orange lake when his army passed through the village of Potano in 1539. Part of the Timucuan confederation, Potano village is thought to have been located on the NW corner of the lake. Later in the 16th century, Potano was raided by French and Spanish soldiers, sent from their settlements on the lower St. Johns River and St. Augustine, respectively.

During the mission period, a “visita” called Buena Ventura was established in the same area – possibly on the same site. 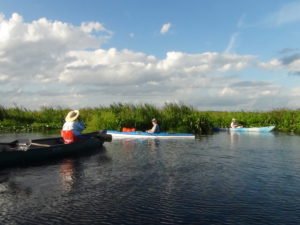 Drifting among the tussocks

One interesting early account was given by Lt. George McCall, who camped in the McIntosh area During the Second Seminole War. McCall, was one of those rare soldiers who took the time to write of the people and places he saw. When his detachment made camp at Orange Lake in the 1830’s, he described Orange Lake as a “fairy land of gorgeous vegetation (where) nature seems almost to have exhausted invention in preparing for herself an abode where peace, adorned with all that is exquisite in climate, all that is beautiful in scenery, might love to dwell.”“ He went on to say “the margin of the lake is a broad belt of orange groves, extending for miles upon miles.”

On the afternoon of his arrival, McCall noted “a green island which, at the distance of half a mile, raised its head above the bright water…”. The following morning he was startled to discover that “the island I had observed the previous day had disappeared, and on further examination the water of the lake seemed to have receded from the shore nearly one hundred yards. It was not until I walked down to the shore of the lake that I discovered that the island I had noticed the day before had drifted with the wind against the shore where I stood.” (Letters From the Frontier. George A. McCall. 1868) 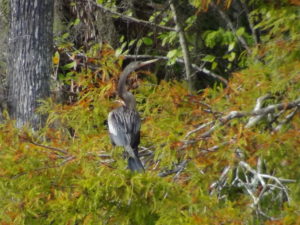