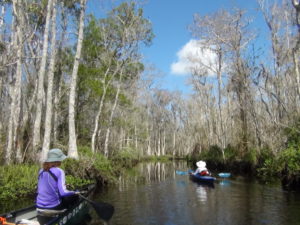 The meeting site is in the Town of Suwannee, about 1.5 hours W of Gainesville.
Description
This tour follows a network of beautiful back creeks and side channels along the lower Suwannee River. Our entire trip is within the bounds of the 53,000 acre Lower Suwannee National Wildlife Refuge. Here, low tidal creeks and coastal swamps are home to a fantastic array of bird, reptile, amphibian and insect species. While the main channel of this last leg of the Suwannee is relatively wide (averaging 600 – 800 feet across), the backwaters we follow on this trip rarely span more than 100 feet and are partially shaded near the edges by overhanging bald cypress, water elm, tupelo, ash, maple and oaks. The shrub layer is dominated by swamp dogwoods, Walter viburnum, buttonbush and climbing asters.This tour is part of our “Wild Florida Chronicles” series, in which we follow the routes of some famous explorations. On this segment of the series, we follow the Chapman/Brewster expedition of 1890. While this team of famous naturalists only spent a couple of weeks exploring this area, their combined knowledge, along with with detailed notes and journal entries, left us a great snap-shot of life along the lower Suwannee in the late 19th century. Most of the species they described are still here, including great blue, tri-colored. little blue herons, great and snowy egrets, prothonotary and parula warblers, swallow-tailed kites (in the summer) osprey and many more. 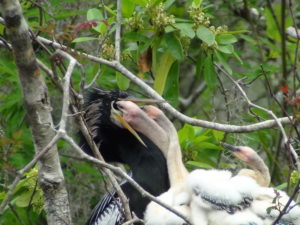 Wildlife
The lower Suwannee is a bird-rich environment, with waders, shore birds, raptors and many others being well-represented. Bald eagles and osprey are common. In the summer, watch for Atlantic sturgeon, a migratory species that can get up to 200 pounds. From April through November, these huge, silvery fish are often seen (and heard) jumping high out of the water. Manatees are also a possibility, especially in summer, as are swallow-tailed kites. One of the more surprising species you’ll encounter are bottle-nosed dolphins. They often hunt in these waters for both freshwater and brackish water species such as redfish, bass, bream, sea-trout, catfish and mullet.

The record of prehistoric human activity in the coastal lowlands near the mouth of Suwannee River is scant, compared to other parts of Florida. Numerous shell middens, located on barrier islands and on high ground along area waterways, stand as silent monuments to once-thriving communities that date back thousands of years to the Archaic period and continuing to up to the arrival of Europeans. However, during the first centuries of European exploration, conquest and settlement, this remote corner of the Gulf coast was largely bypassed. 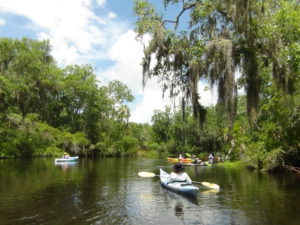 Euro-American attempts at settling this area have always been small scale – rarely more than the optimistic efforts of homesteaders wanting simply to fish, hunt and raise healthy families. Needless to say, there is little documentation of these rare and fleeting endeavors. Those few settlements that involved more than just one or two families are known mostly from secondary sources and vague references and were very short lived.It was this remoteness and the unknown nature of this area that inspired three well-known naturalists, William Brewster, Dr. Charles Slover Allen and Frank M. Chapman,to embark on an exploration of discovery and nature study in 1890. In March of that year, the three men set off from New Branford (today’s Branford) aboard a little “house scow” (a small houseboat) named the “Coota.” For the next two weeks, they slowly made their way down the river, exploring side channels, taking notes and observing the wildlife. In keeping with the long-standing tradition of nature study, they shot as many animals as they could – great for detailed study of plumage and anatomy, not so great for species populations (the idea of nature conservation, as we know it, was still generations away).

Towards the end of their 70 mile journey, as they approached the Gulf, they spent increasing amounts of time exploring the back waters and tidal creeks. Here, among beautiful swamps of cypress, bay, tupelo and pumpkin ash, they were dazzled by a menagerie of bird species. In total, they tallied 107 bird species, including some of the last ivory-billed woodpeckers recorded in Florida (one of which was shot). Also of interest were their sightings of Bachman’s warblers – a species named by John Audubon (though he never saw one alive) in honor of the birds discoverer, John Bachman. These birds, too, are probably extinct.

Difficulty
The back channels of the lower Suwannee River basin are slow flowing meanders with very little current. The main river channel and back streams alike are tidal and reverse direction of flow with an incoming tide. So, if you explore this region on your own, don’t use the direction of flow to help navigate in any way. The route we take on our tours is very remote with few places to get out and stretch (or use the bushes ;o) so if you need frequent bathroom breaks, this one might not be suitable to you. Winds can be an issue in the wide-open main channel of the Suwannee, but we are able to stay off the main channel for the entire trip if necessary. This trip is suitable for intermediate and expert paddlers. 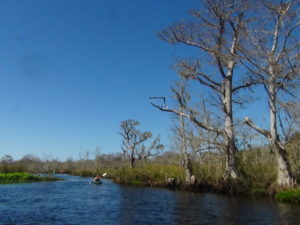