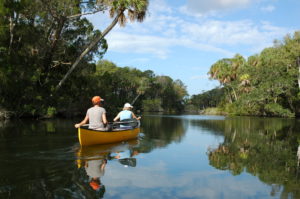 The Chas (a common nickname) is the quiet, unpretentious little sister of the popular GOMER (Gulf of Mexico Region) spring rivers. With Crystal and Homosassa rivers vying for attention to the north and the siren’s song of rhine-stoned mermaids luring tourists to Weeki Wachee to the south, the Chas has gone relatively unnoticed. That, in itself, would usually be enough to make this a must-do trip for the “wanna go” crew. But there’s more! This river’s isolation is no fluke. It runs through the heart of a beautiful, 40 square mile wetlands 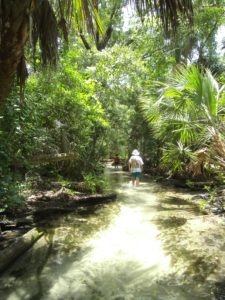 formally known as Chassahowitzka Swamp. And, if that’s not enough (now I’m sounding like a used car salesman), there are also springs! Granted they’re not big, showy fountains like those of her sisters (in fact, some are choked by a brown, flakey (probably algal) material) but several are nice swim holes.

*CAUTION* Some springs near the mouth of the river are tidally influenced and periodically reverse flow, changing from out flowing springs to inflowing siphons with a strong pull.

An old crab-man once told me “there ain’t no ho’s in Chassahowitzka.” It took me a moment to realize he wasn’t trying to crush any dreams I might have of finding a hooker, but was simply letting me know that the locals call the river, “Chassawiska.”.

I had been drifting alongside the grizzled old-timer, me in my little canoe, he in his flat , open crab-boat, for nearly an hour as he simultaneously worked his traps and doled out colorful anecdotes in answer to my questions. He told of outlaws, such as Al Capone, who sought refuge in the area’s remoteness and of huge tarpon which, even today, draw fishermen from around the world every summer. He even waxed a little poetic when describing the thousands of water birds that sometimes fill the trees during nesting season. They were the driving force behind the creation of the Chassahowitzka National Wildlife Refuge.

Finally, with dusk approaching it was time for us to part ways and head home. He cranked his motor and as his boat was pulling away, I guess he decided I had shown enough appreciation to be worthy of knowing the finer points of the river’s name. His sparsely-toothed grin grew especially wide as he shouted again, over the roar of his motor, “nope, no ho’s here, he he.” I don’t know if it was the joke or the love of his lot in life, but at that moment he was truly delighted with himself – and so was I..  ( Lars )

As you’ll learn from the caution signs on the highway coming down, there are bears in these woods. But here, as elsewhere, the Florida black bear is an elusive critter. You have a much better chance of spotting a deer or wild hog rooting along the river bank. On the river bank, there is an otter ‘scent post’ where a number of otter’s ranges overlap. At this spot, passing otters roll and rub themselves in scented oils left on twigs, leaves and rocks by other otters. As 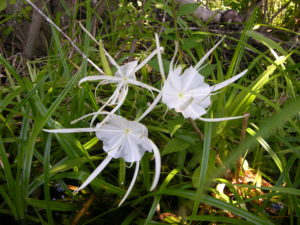 they roll, jump and tumble excitedly in the irresistible aromas, they deposit their own musk for other passing otters to enjoy. When there’s an otter wallowing in the musky ‘scent post’ it’s usually so immersed in it’s rapture that it doesn’t pay any attention to us as we watch, only 10 yards away in our boats. But, as with all of our wildlife encounters, our first priority is to not disturb the wildlife or make them alter their behavior in any way by our presence. 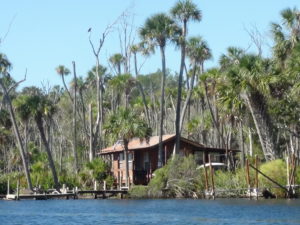 As mentioned, the winter brings great birding to this area. A new program to encourage whooping cranes to migrate to Florida began in the fall of 2001. Led by an ultra-light airplane, the small flock of birds were led to the Chassahowitzka marshes where they will spend the winter.

This is Florida’s State tree, yet it is not so much a tree as an overgrown grass. In fact, they are more closely related to the lilies huddled at their feet than the trees at their side. The fruit (dates) of this ‘tree’ are an important food for wildlife including bears. Bears will also occasionally tear out the crown of the tree to get to the growth bud. This has long been a favorite dish on the tables of southern woods folk, and still finds its way onto the menus of many local restaurants, listed as ‘swamp cabbage’ or ‘heart of palm’. It’s really does taste good, but removing this ‘heart’ kills the tree, and is illegal. For Florida Indians, the dates were an important part of the diet. They also made cordage from leaf fibers and used the fronds to cover huts and chickees.